Meet me in St. Louis

We had our first summer 2011 get-away weekend recently. We went to the deep south. And as anyone who is from the general Chicagoland area knows, everything south of I-80 is the deep south.

So we headed to the land of rednecks and poo-holes known to us northerners as St. Louis. There are a few important things to know about St. Louis.

Okay, maybe I am over-generalizing. It was Cubs-Cards weekend, and the Cardinals officially handed the Cubs their asses on a stick. I’m just saying — Jackie — you’d think that would be enough. I’m just letting you know — Kyle — your “How many rebuilding years can the Cubs have” t-shirts are stupid. That’s all I’m saying.

The trip to St. Louis had us worried, as it seemed this was going to LITERALLY be the crappiest weekend ever. And I don’t believe in using the word “literally” unless I mean it. Because one minute it was all this:

And the next thing we knew, little George there got a look of complete and utter fear on his face. Followed by the runs. And when five-year-olds get a case of the runs, they don’t squeeze their butt cheeks together real tight and hold on until the next stop. They wait until you are two milliseconds past the point when you could reasonably take the exit without flipping the Kia Sportage, chit their pants, try to lie about it as if we cannot smell that nonsense, and suddenly there’s a good ten miles between the next stop and where you sit now in your stinky, nasty car.

Finally. We make it. Lincoln, Illinois.

We would like to take this opportunity to formally apologize to the people of Lincoln who entered the bathroom at the Wendy’s and had to smell that. Score for Jim for biting the bullet on taking care of this.

Wipe. Clean. Throw away underpants and put on fresh ones. Back in the car.

We would like to take this opportunity to formally apologize to the people of Williamsville, Illinois who entered the bathroom at the McDonald’s and had to smell that. Score TWO for Jim for biting the bullet and taking care of this.  I took this opportunity to go to the convenience store, where I picked up a bottle of Pepto, read the label, clearly saw it said not to give it to children under six, and gave it to my five-year-old anyway.

Wipe. Clean. Throw away underpants and put on fresh ones. Back in the car.

I wish I had taken a photo of Jim’s face. He pulls off into Middle of Nowhere, Illinois, into a lovely gas station that was slightly nicer than what I assume hell looks like, put the car in park, and stared straight ahead. Clearly it was my turn. I retrieved the LAST pair of underwear from George’s suitcase, helped him waddle into a bathroom that even Britney Spears would find gross, and proceeded to used every disinfecting wipe I had to clean various surfaces (to no avail). Wipe. Wipe. WIPE. Holy balls, people, it was wrapped around his balls! It’s bad enough changing the diaper of a two-year-old. A five-year-old with the runs might as well be YOU with the runs. I swear to God, the child does not have enough lower intestine to produce that much crap, but out it catapulted from his ass.

We would like to take this opportunity to formally apologize to the people of Wherever-the-hell-that-was-south-of-Springfield, Illinois who entered the bathroom at the gas station closest to the highway and had to smell that. Especially the three terrified looking women who were standing there when I opened the door after ten minutes and my child still had a little dookie stuck to the back of his leg. I had to clean it with a sunscreen wipe. But, in my defense, minus the smell, I think I left that bathroom cleaner than I found it.

More Pepto and a quick prayer — we are out of underwear.

Okay, this time their was no rear-end explosion. But the child does suddenly say, “I have to pee!”

Come on, now! Again, barely a foot past a safe place to turn off the highway.

Jim takes the next exit. We probably should have noticed that the sign said, “Exit to Terror Land, HERE!” At this exit there were two things — a gas station/liquor store complete with a woman smacking her child and a man picking his teeth with a knife… and a Venture. You know what does a fast U-turn? A 37-year-old man driving a Kia Sportage.

At this time, Jim distracts George by telling him he can see the arch. Nevermind the kid had no idea what the arch was up until that point. It’s RIGHT THERE! (we can’t see it yet). LOOK THERE IT IS! (still can’t see it). THE ARCH!! (finally!)

Over the river, into town, toward the ballpark, suddenly turn into tourists (LOOK! *point* THE STADIUM *point-point* TALL BUILDINGS! pointy-point-point* THAT WAS OUR TURN BACK THERE *backwards point*).

Parking. Hotel. Check-in. Poops seem to have passed, so hell, let’s get in the pool. It’s dark. No one will notice if George takes another un-toileted shat (he didn’t).

Back to a quick rant of the Cardinals here — This was Friday. The game ended shortly after we got to the hotel, 6-1 Cards. And I found myself alone in the elevator with several drunk, overly cologned 20-somethings, letting me know, “THE CUBS WERE RAPED TONIGHT. UN-CON-SENSUAL RAPE!!!” Then there were some bro-hugs and bro-fives. Honestly Jackie. This excuses your choice of a DE-troit fan, because two Cardinal fans would be unacceptable at Mr. E’s place in Wisconsin. I’m just sayin’.

Anyway, with the backseat blowouts safely behind us, we got to the business of enjoying the rest of the weekend, which frankly, was awesome.

Foot of the arch! 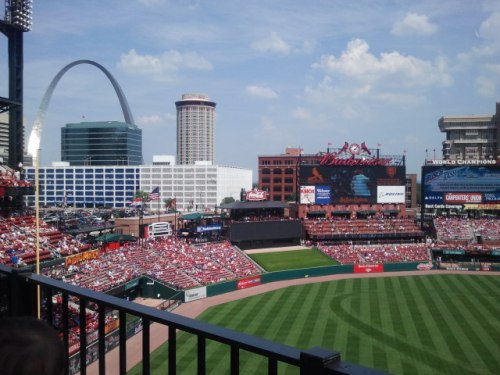 View from our seats!

View from the arch.

Feeding the fish at Union Station. 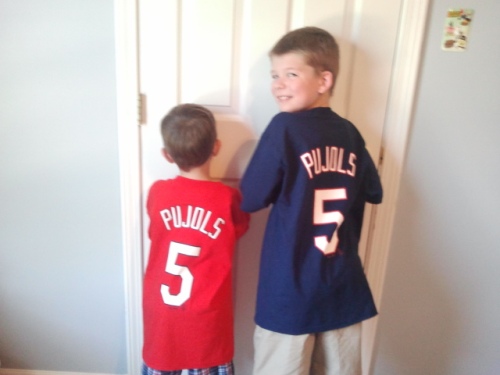 Seriously. That bigger one there — three separate trips to the hospital, eighty-bizzilion hours of labor before a c-section, single parenting. I went WITHOUT health insurance so I could afford it for him. And the little one — ten months of refusing to be held at feeding time by anyone but me and my right boob. Poor righty was all full and sore and nasty because he wouldn’t take lefty. Not to mention the ABOVE DESCRIBED POOP TRIP 2011. And this is the thanks I get.

Just let it be known, if you two EVER yell in an elevator that the Cardinals have just raped the Cubs, I will seriously have you removed from the will.

The following is an actual conversation from this morning:

Me, spotting a little black spider lowering itself by the stairs: “Oh. Icky. A spider.”

Me: “Eeewwwweeeeeee…. Get me a tissue.”

Him, handing me TWO squares of toilet paper: “Here.”

Him, brushing past me and snatching up the toilet paper: “Sheesh.”

Me: “FLUSH IT DOWN THE TOILET!”

Him, flushing the defenseless and squished spider down the loo: “You women…”

Tagged as boys!, gross, it's only natural, motherhood