Sock it to me

My husband is a good guy. You know, good provider, good father, occasionally listens to the things I have to say. All the qualifications for a likable dude. But he is absolutely inept at one particular thing, and it involves his stinky man feet, his socks, and the hamper. More specifically, when he pulls his socks off of his stinky man feet, he cannot, for any reason ever, manage to put them in the hamper. 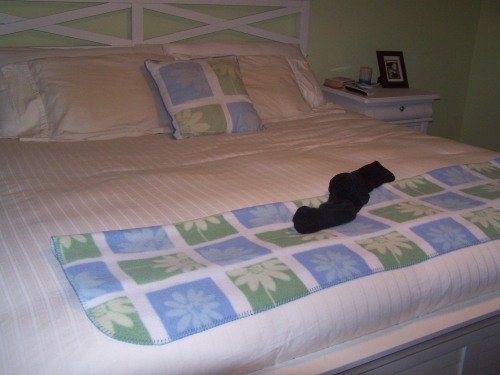 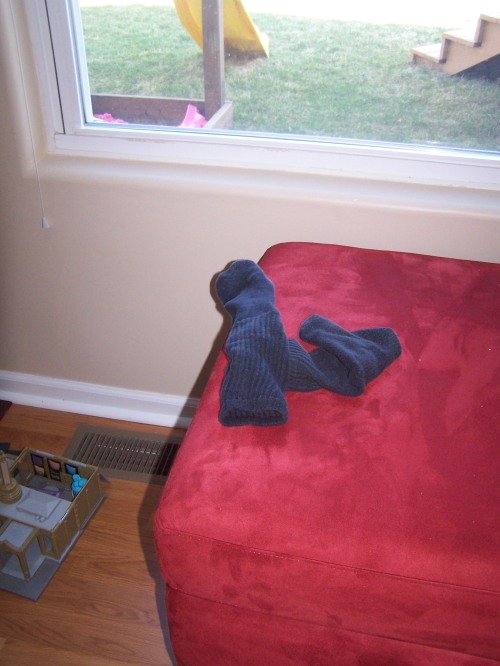 It’s like he just takes them off and flings them. Nevermind that the rest of his clothing makes it INTO the clothes hamper. His socks are magnetically attracted to areas where they DO NOT BELONG.

Sometimes I don’t even realize it:

Look how sweet George is, asleep on the red sofa.

Wait, what's that under his pillow?

Oh, look at that, it's Jim's freaking socks. On the arm of the couch. Under a pillow. Right where they apparently belong. Jackass.

Sometimes, he’s oblivious to the fact that he does it, or that I have been carefully documenting it:

In both of these photos, Jim had no idea why I was pointing a camera at him, so he decided to ignore me. After I snapped each photo, I said, “Do you know why I took that?” Nope, he would reply. I’d point at the floor, at which point he’d take a look, shrug, and continue watching whatever was keeping his attention on the television. And no, your eyes are not decieving you. In the second picture, there are TWO pairs of his nasty socks on the floor.

If I told you I was stark naked when I took the photos, it would be a lie. But had I been, Jim’s expression would have been the same indifference — don’t bother me and my socks, woman, we’re watching the game.

Here, we see the same socks on the floor, but two different days.

Recently, though, this epidemic has reached absolutely unacceptable heights. Witness this:

In the endless battle of nature versus nurture, Jim is proving that nurture wins. Those are Hank’s shoes and socks.

Look people, I’ve tried. But the man is impossible. No matter how many times I beg and plead that he put his socks in the hamper (with the rest of his freaking dirty clothes), it does not happen. Worse, there is no amount of ill placed bras, granny panties, feminine hygiene products or dirty dishes that can make him see the other side of the issue. I CANNOT GET HIM BACK. Leaving his socks on the floor when company is coming is also not a deterrent! What’s a gal to do?

Please, if you can, help me. This sock takeover of my home may actually consume me, and I am telling you right here and now, I am not responsible for my actions.

Tagged as frustrated!, marriage, what the hell?

4 responses to “Sock it to me”