So, the Cubs and Sox are playing this weekend in the second installment of this year’s big crosstown classic. Which frankly, lost all its allure (in my opinion) when interleague play started. Back in the day, when it was just a single game that they played for the fans on an off day for both teams, that was good stuff. I had my Chicago Tribune issued poster with caricatures of Jim Frey and Tony LaRussa hanging on my closet door for much of my childhood.

Now, it’s even been named. This year, the winner gets…

My brother promptly announced that while the cup itself is lovely, it leaks. He also thinks it should be handed to the loser, not the winner. Too bad, sucker, the Sox have already embarrassed the ever-living pants out of the Cubs, 4 games. You win! You win! You win! Take your BP Cup and put it in your BP case next to you BP World Series memorabilia from 2005 and celebrate with some of that nasty BP Miller Lite you drink on the South Side. It’s one championship the Cubs are happy to lose! Hoo!

Anyway, I headed to the game with the boys yesterday. Had a great time. The only real entertainment was when Carlos Zambrano had a temper tantrum in the dugout and was told to go home, you know, after giving up four runs in the first (final score 6-0 Sox). We had a pretty good view from our seats. Oh, I was so proud to be a Cubs fan at Comiskey U.S. Cellular Field. Those Ricketts kids are turning this team around!!! Thanks Omaha!

But there was one awesome highlight of the game. Check it out: 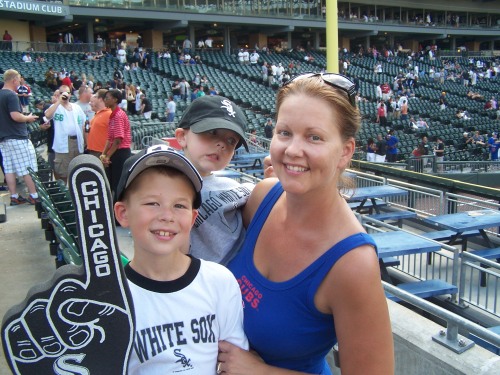 My sister Laura snapped this photo of me and the boys after the game. Sure, George looks like a total goober. But look how skinny I look! And no snide comments from those of you who are like, ummm, sure you look skinny, in you know, a total fatty type of way. Shut up, I look good!

Well worth the loss, Cubs! I’m ready for my BP Mother of the Year Award!