There’s some exciting happenings here in the greater Chicagoland area this fine June day. And all thanks to a bunch of guys collectively known as the Chicago Blackhawks.

Let’s start with the obvious: I am not a hockey expert. Not even close. When I lived down in Baton Rouge, where hockey was surprisingly popular, Kayla, Nancy and I, along with other various WBRZers, would often find ourselves at a Baton Rouge Kingfish game. With no idea what was going on, but there were fights on the ice and cold beers in our hands and um, we were young and kinda hot and those were the days, you know what I mean?

My first Blackhawks hockey game was with my sister Laura at some point in my early 20’s. We found our seats at the United Center, somewhere around the ninth row off the ice. I turned around to put my jacket on the chair, and *WHACK* something hit my ass. I turned around and there were a few players warming up on the ice — not Hawks but I can’t remember who they were playing, maybe Tampa — who were actually laughing at me. It was a puck. My big old butt was a bulls eye. I looked around and found that puck on the ground under my seat. I think I still have it somewhere. I also dropped 40 pounds after that!

I watched my first Stanley Cup Final in 2000, while working nightside at WGNO. I do not remember who was playing or who even won (though Wikipedia tells me it was Dallas and New Jersey, and New Jersey won). I do remember that the game went into triple overtime one night… and double overtime the next game. And Al Michaels said, “If you don’t love hockey, you should.” That struck me as very funny and I thought, maybe I should watch hockey. But it wasn’t something I ever got into.

When I moved to Quad Cities, I went to several Quad City Mallards games. There’s a pattern here, in case you were wondering — people who work in television, especially in small markets, really have no issues getting free tickets to minor league games of any kind! I remember one game, when a guy was leaving the ice after a fairly nasty fight, and one of the dudes from the other team was chasing him. And we were all in the stands yelling “BEHIND YOU!!!” like it was a scary movie. That guy — the Mallard — got to the exit, waited for the guy to get close, and pulled the glass door behind him real fast so the would-be attacker just smacked himself into the glass. Hilarious. That was the last time I went to a hockey game until I met my husband in 2004.

Jim loves hockey. Loves it. Loves it so much that, knowing it was not a popular sport in these parts, did not TELL me that he loved it until after we were married. Made it sound like, sure, I’ll watch it if it’s on, but I mean, it’s no big deal. He was a big fat lying liar. He loves hockey. The day he realized I would sit and watch it with him, I think he fell in love with me in a whole new way. 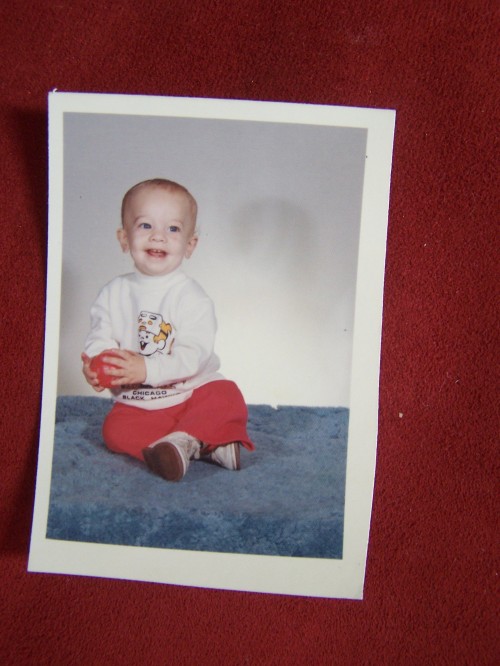 OK, it’s a picture of a picture, so it’s cooked and not so great. But as you can see, he’s wearing a Blackhawks shirt.

Here’s Jim and his friend Eric loving hockey somewhere in the early 90’s: 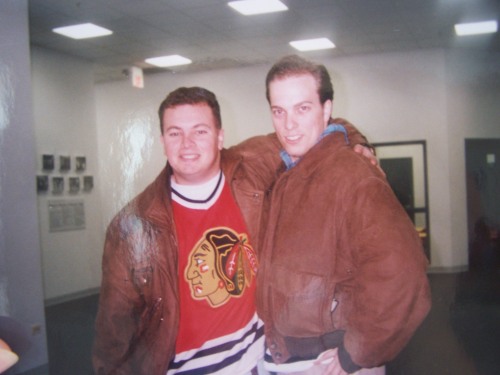 Just a few years ago, if you went to the United Center on hockey night, it was a ghost town. Totally dead. These days, it’s packed. Now, there are those folks (Tommy) who like to get into the issue of “true fans” versus “band wagon fans” and all that nonsense. That the “true” fans are the rough and tumble guys in the upper deck who stuck with the team even when they sucked, the same guys who couldn’t afford a playoff ticket even if they sold their alcohol-infused liver on the black market. To this, I say, bah!

First — who cares when someone became a fan? You’re not allowed to love a team because you just started loving them this year? That’s stupid.

Second — the Blackhawks just came on television last year. For years they were blacked out, because owner “Dollar Bill” Wertz wasn’t willing to put his team on television and give the product away for free. They only came on TV now because the old man kicked off and his son decided to actually let the fans WATCH what was happening. It’s asking a whole lot of people to stick with a team through and through when not only are they not winning, but you cannot even see them play unless you drive into the city, pay for parking, pay for a ticket (even a cheap one) and pay for concessions. My husband still did this — often. But there were plenty of smiling and cheering faces in the crowd this year and last year who did not. It does not, in my opinion, make them any less worthy as fans.

I asked Jim if I was one of these band wagon fans, and he quickly pointed out that I am not. That while I certainly am no expert, the team sucked balls when he first started taking me to games. And I tried, desperately, to learn the game. I get strategy and I can follow the puck (which is a feat, by the way, when you are trying to learn this sport — that stuff moves FAST) and I understand some of the calls and rules but not as many as I wish I did and I FINALLY get the line changes.

So last night, as we watched Game 6 of the Stanley Cup Finals, I reached over and checked Jim’s pulse. It was racing. Then, I checked my own, and it too was racing. Sweet Christmas, I AM a fan!!

Jim was deflated when the Flyers tied it up. And just like everyone in the world EXCEPT for Patrick Kane, we were more confused than excited when that winning goal went in the net during overtime. I’ll bet if we could turn back time and listen to the city of Chicago and the city of Philadelphia as a whole, we would hear a collective, “What the hell just happened?” PK was the ONLY person who knew that puck went in. When we watched it back in slow motion, you could pretty much hear most of my neighborhood cheer as we realized that the Stanley Cup was coming home to Chicago. Neighbors let off fireworks. Hank ran out the back door with a pot and spoon and banged away. Jim did NOT cry (ahem). Dudes… THAT.WAS.AWESOME. 49 years without a championship. It’s nice to be on this side every once in a while.

So thank you Blackhawks. Thank you for giving my husband a championship team. He loved the Hawks even when they were completely unloveable, and doesn’t care who is loving them now right with him. Mostly, thank you for giving us something to watch that is not baseball, because seriously, the Cubs and Sox blow. And thank you PK for knowing it before anyone else did. That was pretty cool.

3 responses to “Kane and able”